November is Native American Heritage Month, a time to celebrate and call attention to the culture, tradition, history, and contributions of Indigenous people. Our programs continue to be focused on commemorating and encouraging the study, observance, and celebration of rich and diverse histories and cultures throughout the year.

This month, we’re celebrating two individuals dedicated to preserving and telling the stories of Indigenous people, as well as highlighting the history of Native American Veterans and Native Americans in Indiana.

Brenda Child was born in 1959 on the Red Lake Ojibwe Reservation (Miskwaagamiiwizaag’igan) in northern Minnesota and is a citizen of the Red Lake band of Chippewa. She has a bachelor of history and social studies from Bemidji State University and a master’s and Ph.D. in history from the University of Iowa.

Brenda is currently a Northrop Professor at the University of Minnesota. She teaches American studies with a focus on American Indian history, the legacy of American Indian boarding schools in the United States, the role of Ojibwe women, Indigenous education, social history, and the historical legacy of the jingle dress. Brenda is also an award-winning author of several books centered around American Indian history, including her children’s book Bowwow Powwow (Bagosenjige-niimi’idim.) This picture book tells an imaginative story featuring Windy Girl’s dreamworld retelling of a powwow where all the dancers are dogs, and is also accompanied by an Ojibwe translation.

Brenda has also served as the president of the Native American and Indigenous Studies Association and as a trustee of the National Museum of the American Indian Smithsonian, where she served on the Repatriation, Executive, Scholarship, and Collections Committees. She has also worked closely with the Minnesota Historical Society, the Heard Museum, and several other museum and heritage organizations to help preserve and accurately tell the story of Indigenous people.

Charitie Ropati is of Yup’ik and Samoan heritage and is a member of the Native Village of Kongiganak. Born and raised in Alaska, Charitie realized early on that her people and heritage were not represented in her formal education. Her activism began in high school when she led the fight in her school district for 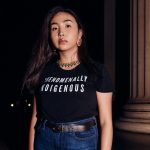 students to wear native cultural regalia during graduation. This led to the Anchorage School District’s change in policy that allows students to display their native culture regalia during graduation ceremonies still to his day. This was Charitie’s first step in her journey to fight the erasure of Native Americans in history books and the education of Indigenous students. Native American youth have the lowest graduation rates in the nation, and very few enroll in higher education institutes. To combat this, Charitie has worked to develop a new curriculum that provides accurate depictions of Native Americans, their history and perspectives, and the violence and atrocities they have faced throughout history.

Today, Charitie is an undergraduate student at Columbia University and is a researcher in the Griffin Lab studying the intersections of the cultural resilience of Native coastal communities, plant ecology, and permafrost. She is also a member of the Columbia University Earth Network, a research assistant at the Lamont-Doherty Earth Observatory, and a Yale Public Voices Fellow. Charitie was also named the 2019 Champion of Change by the Center for Native American Youth for her work in high school, the 2022 “In the Know” Changemaker for her activism, and was nationally recognized in Teen Vogue, The Guardian, and The Malala Fund.

not segregated into separate units. However, due to the misconception that all Native Americans are warriors, they were often assigned to the most dangerous missions and placed on the front lines.

For many, serving in the United States armed forces has become an honorable tradition. Native Americans join for many of the same reasons, including legacy, demonstrating patriotism, access to education and employment, ending generational poverty, and defending their native homelands. Throughout history, Native American veterans have been highly regarded for their dedication and commitment to service. They also serve at a higher rate than any other population, with over 24,000 enlisted in the US Armed Forces and over 150,000 veterans, according to the Department of Defense.

Indiana, which means the land of the Indians, was originally home to several Native American nations, including the Miami, Shawnee, Illinois, Potawatomi, and the Lenape (Deleware.) Each nation had its distinct language and culture, along with some shared practices. Due to European invasions in the early 1800s,

most of the Shawnee and other smaller tribes were forced westward due to oppression and poverty. The remaining Shawnees were subjected to the burning of their villages in the central Ohio Valley by Europeans wanting their land, which led to the migration to northeast Indiana by tribal leaders Tecumseh and Tenskwatawa.

They established Prophetstown near present-day Lafayette, Indiana, now Prophetstown State Park. Tecumseh and Tenskwatawa led a confederation of Native American groups in an attempt to regain their land and stop the takeover of the Europeans. This confederation consisted of Native Americans from New York, Canada, Arkansas, Minnesota, and possibly as far south as Florida.

In response to the confederation, the governor of the Indiana territory at the time, William Henry Harrison, moved troops within a half-mile of Prophetstown to initiate a surprise attack in November 1811. Tenskwatawa learned of the planned attack and surrounded Harrison’s men, which began a battle that resulted in heavy losses on both sides. Soon after Tenskwatawa and his men retreated, Harrison burned Prophetstown to the ground, causing all residents to flee.

The conflicts between the Native Americans and Europeans eventually led to the forced removal of Indigenous people from Indiana territories and farther west with the passage of the Indian Removal Act in 1830. The Potawatomi held out until 1838 and were forcibly removed in what is now known as the Trail of Death, in which 41 of the 859 villagers died during the 660-mile journey from Indiana to Kansas.

Removals like these led to the depletion of Native American populations, which have never recovered. Over the years, tribal citizens have returned to Indiana. Citizens from over 100 different tribes live in Indiana today. Indiana is estimated to be home to over 55,000 Native Americans, with the highest populations living in Marion, Lake, and St. Joseph counties.