Throughout history, women have played a vital role in creating lasting and impactful change across the United States and the world. These accomplishments and contributions are important to recognize, learn about, and celebrate not just during Women’s History Month, but all year long.

That’s why our programs provide ongoing opportunities and resources that allow every student to learn about and reflect on the female trailblazers, innovators, and activists who have paved the way within various fields. This month, we’re thrilled to celebrate four historical women who played a significant role in improving their communities and opening doors for future generations by helping to facilitate housing and education reforms. 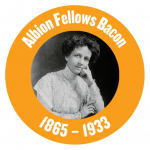 Albion Fellows Bacon was born in Evansville, Indiana. In 1888, she married Hilary Bacon, and together they had four children.

In 1909, two of her daughters contracted Scarlet Fever. To understand how Scarlet Fever was being spread, Albion began visiting apartment complexes where she witnessed overcrowding and dilapidated conditions. The impact of this experience led to her campaigns for housing reform and other issues that would improve the quality of life for Indiana youth.

Albion earned a national reputation as a social reformer, which earned her an appointment to the President’s Conference on Home Building and Home Ownership. She served on the standards and objectives committee. Her passion for improving the lives of Indiana’s children led to her holding leadership roles with the Indiana Child Welfare Association, the Child Welfare Committee, the Women’s Section of the Indiana State Council of Defense, the Indiana Conference of Charities and Corrections, and the Juvenile Advisory Commission of Indiana’s Probation Department. 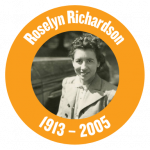 Roselyn Richardson was born in Roberta, Georgia. She attended Clark College and Atlanta University School of Social Work, where she received a community organization and group work certificate. In 1938, Roselyn married Henry Richardson Jr., an attorney, and former Indiana state legislator. They moved to Indianapolis, Indiana, and had two sons.

Soon after arriving in Indianapolis, Roselyn became involved in numerous civic, religious, political, and educational causes. She served on the Board of Directors of the Phyllis Wheatley Young Women’s Christian Association, co-director of the Intercollegiate Co-educational Club of the Senate Avenue Young Men’s Christian Association, and a director of the Flanner Guild.

When their oldest son was denied enrollment in their neighborhood school, IPS #43, the family became actively involved in desegregating Indianapolis Public Schools. Their work during the movement eventually led to the passage of the law that desegregated Indiana schools in 1949.

Roselyn was also active in the Parent Teacher Associations at her sons’ schools, IPS #43, #87, and Shortridge High School. During her involvement, she served on the board and eventually organized and chaired the Pupil Motivation Committee, which brought in role models to share about their careers. This led to her becoming the director of the Career Sampling Program at Shortridge High School. This experimental program that she led from 1971-1978 allowed students to gain exposure to different career options by going to job sites during the day. More than 500 students were enrolled in the program each year. Some of the first organizations to participate were Eli Lilly, Allison Transmission, Methodist Hospital, and Indiana National Bank. 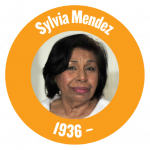 Sylvia Mendez was born in 1936 in Santa Ana, California, to Mexican and Puerto Rican parents. Soon after her birth, the family moved to Westminster, California.

In 1944, Sylvia’s family tried to enroll her and her brothers at the neighborhood school but were turned away because segregation laws did not allow Hispanic and White students to attend the same schools. Shortly after, her parents decided to take legal action and led a community movement that changed California and set a legal precedent for ending school segregation in the United States. This led to the 1947 court case, Mendez vs. Westminster, which desegregated all public schools and spaces in California.

In 1948, Mendez and her siblings would become the first Hispanics to attend an all-White school in California. She later became a nurse and, after retiring, began traveling the world to educate others on the historical contributions of her parents and the desegregation efforts that led to the success of Brown vs. Board of Education that ended school segregation in the United States. In 2011, Mendez received the Presidental Medal of Freedom for her advocacy for equality in education. 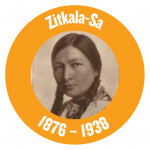 Zitkala-Sa, also known as Gertrude Simmons Bonnin, was born in 1876 on the Yankton Indian Reservation in South Dakota. She lived on the reservation with her mother until she was eight years old.

In 1884, missionaries recruited young children, including Zitkala-Sa, to be educated at the White’s Indiana Manual Labor Institute, a Quaker boarding school in Wabash, Indiana. Zitkala-Sa attended the school for three years and learned how to read, write, and play the violin. Later she would describe the misery of being stripped of her heritage, the cutting of her hair, and being forced to pray as a Quaker during her attendance. After returning to her reservation, she no longer felt like she belonged and thought that many Native people were losing their traditions by conforming to white culture.

At age 15, Zitkala-Sa returned to White’s Indiana Manual Labor Institute, where she learned piano and began teaching music. In 1895, she graduated from the institute and gave her first speech on the inequality of women’s rights. She then attended Earlham College in Richmond, Indiana, and began writing about the Native American experience and gathering traditional stories from Native tribes.

In 1897, Zitkala-Sa went to the New England Conservatory of Music in Boston to study and play the violin. Two years later, she took a job teaching music and facilitating debates on the treatment of Native Americans at the Carlisle Indian Industrial School in Pennsylvania. She began writing articles on Native American life, which were published in national periodicals. Zitkala-Sa continued to speak and write about Native American culture, tensions between tradition and assimilation, and between literature and politics until 1924. She remained politically active throughout her life, creating the Indian Welfare Committee of the General Federation of Women’s Clubs and the National Council of American Indians. She also joined the Society of American Indians and spoke nationwide to promote more awareness of the tribal and cultural identity of Native Americans. She was also instrumental in the movement that led to the Indian Citizenship Act in 1924. Zitkala-Sa continued to fight for civil rights, health care, and education for Native Americans until her death in 1938.