May marks Asian American Heritage Month, a time to recognize and celebrate the contributions and influence of Asian Americans and Pacific Islander Americans to the history, culture, and achievement of the United States.

We’re thrilled to be able to highlight four historical Asian American and Pacific Islander Americans who were committed to improving their communities through furthering education, serving youth, and advocating for the rights of marginalized groups. We are proud to provide opportunities and resources for every student to learn about, grow from, and reflect on Asian American and Pacific Islander Americans’ contributions this month and always. 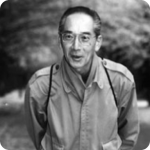 Yuji Ichioka was born in San Francisco, California, in 1936. He spent several years of his childhood with his family in the Topaz War Relocation Center, an internment camp in Utah that held Americans of Japanese descent and immigrants during World War II. Upon their release, Yuji’s family returned to San Francisco, where he continued his schooling, graduated from high school, and joined the military.

After leaving the military, Yuji enrolled at UCLA, where he graduated in 1962 with a degree in history. Four years later, Yuji enrolled at UC Berkeley and graduated with a master’s degree in Asian Studies. In 1968, as the Black Power, American Indian, and anti-war movements grew, he saw that Asian Americans were not being recognized for their participation in these movements and wanted to ensure that their contributions were visible.

While working as an adjunct professor at UC Berkeley, he coined the phrase “Asian American” and founded the Asian American Political Alliance, which focused on unifying all Asian American ethnic groups under one identity to promote social and political action. The racism he experienced and witnessed as a youth while living in prominently black neighborhoods and working alongside Mexicans fueled his passion for social justice. He also paved the way for greater understanding and education related to people of Asian descent and helped establish the Asian American studies program at UCLA. Yuji continued to work until his death to compile Japanese historical resources to tell the story of Japanese American immigrants, which led to the nation’s largest and most significant collection of Japanese American historical archives. 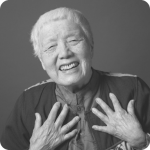 Grace Lee, born Yu Ping, was born in 1915 in Providence, Rhode Island, to Chinese immigrant parents. She graduated from Barnard College of Columbia University in 1935 and received her PhD in philosophy from Bryn Mawr College in 1940.

Unable to find work in academia, she took a low-paying position at the University of Chicago, where she joined the Workers Party due to their activism related to tenants’ rights. During a speaking engagement, she met C.L.R. James, a writer, and activist, which led to her focus on the struggles of African Americans. Shortly after, Grace moved to New York, where she met various cultural figures and activists, such as Richard Wright and Katharine Dunham. She eventually joined forces with C.L.R. James and Raya Duayevskaya to fight for the rights of marginalized groups, such as youth, women, and people of color.

In 1953, Grace married James Boggs, a prominent activist, and organizer. They moved to Detroit, where she got involved with the Civil Rights and Black Power Movements. In 1970, Grace helped found the Detroit Asian Political Alliance. In 1979, she and her husband founded the National Organization for an American Revolution (NOAR). In 1992, Grace founded Detroit Summer, a multicultural intergenerational youth program. Shortly after, the Boggs’ home was turned into the Boggs Center to Nurture Community Leadership, where it operates today. Grace wrote five books related to her activism, and she completed the last one at the age of 95. 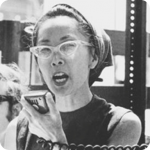 Born Mary Yuriko Nakahara, Yuri Kochiyama was born in 1921 in San Pedro, California, to Japanese immigrant parents. She studied English, journalism, and art at Compton College and graduated in 1941.

In December of 1941, shortly after the bombing of Pearl Harbor, FBI agents arrested her ailing father, who they labeled as a potential security threat due to pictures of Japanese naval ships they found around their house and his friendship with prominent Japanese figures. By the time he was released six weeks later, he was severely ill and died a few days later. Soon after her father’s death, Yuri and her family were removed from their home and sent to the War Relocation Authority internment camp in Jerome, Arkansas, where they lived for two years. While in the camp, she met her husband, Bill Kochiyama, a Japanese soldier fighting for the United States. The couple married in 1946 and moved to New York in 1948, where they lived in public housing and had six children.

In 1960, Yuri and her family moved to Harlem, where they joined the Harlem Parents Committee, a grassroots organization fighting for safer streets and integrated education, and the Congress of Racial Equality (CORE), an African American organization that played a pivotal role in the Civil Rights Movement. In 1963, while protesting the arrest of 600 minority construction workers in Brooklyn, she met Malcolm X. Shortly after their meeting, Yuri joined Malcolm X’s Organization of Afro-American Unity, which fought for the human rights of African Americans. Yuri and her husband also organized the East Coast Japanese Americans for Redress and Reparations movement. They advocated for a government apology and reparations for the Japanese Americans forced into internment camps during World War II.

Yuri also founded the Day of Remembrance Committee in New York, commemorating the day that Executive Order 9066 was signed by President Roosevelt, which led to the forced removal of Japanese Americans from their homes into internment camps throughout the United States. In 1988, President Reagan signed the Civil Liberties Act, which led to a payment of $20,000 to each internment camp survivor. This win led to Yuri advocating for reparations for African Americans. She also actively opposed the mistreatment and profiling of Muslims, Middle Easterners, and South Asians. Yuri also volunteered at soup kitchens and homeless shelters and taught English to immigrants.

In 2005, Yuri was nominated for the Nobel Peace Prize and was recognized by the White House in 2014 for her contributions to her life pursuit of social justice for all communities of color. 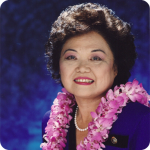 Patsy Matsu Takemoto was born in Maui, Hawaii, in 1927. She attended Maui High School, where she ran and won the position of student body president. Patsy was the first girl to serve in the role, and she graduated valedictorian in 1944. After graduation, she enrolled at the University of Hawaii at Manoa in hopes of becoming a doctor.

In 1946, she moved to the mainland to attend the University of Nebraska, which still had a long-standing racial segregation policy that motivated Patsy to organize a coalition to fight for policy changes on campus. Soon after, she was elected president of the Unaffiliated Students of the University of Nebraska. With the help of her newly formed coalition, Patsy was able to lobby to end campus segregation policies the same year successfully.

Due to a severe medical condition and an unexpected surgery, she moved home to Honolulu to recover. Patsy enrolled at the University of Hawaii, where she graduated with a bachelor’s in Zoology and Chemistry in 1948. After graduation, she applied to dozens of medical schools but was denied admission because she was a woman. Patsy went to work for the Honolulu Academy of the Arts, where her supervisor encouraged her to pursue a career in law.

In the summer of 1948, she applied and was accepted at the University of Chicago Law School. While there, Patsy met World War II veteran and geology student John Francis Mink. Six months later, in 1951, they married, and that spring, she received her Juris Doctor degree. In 1952, the couple moved back to Hawaii.

Due to a statute that stripped Patsy of her Hawaiian territorial residence status upon marriage, she was refused the right to take the bar exam. She challenged the law and won the right to take the exam, which she passed, but still could not find employment because she was married and had a child. With the help of her father, Patsy opened her practice in 1953.

She later joined the Democratic Party in hopes of changing discriminatory practices through law. In 1956, she became the first Japanese American woman in the territorial House of Representatives. Two years later, she would become the first woman to win a seat in the territorial Senate. She would later gain national attention for her speech in favor of Civil Rights at the 1960 Democratic Convention. In 1964, Patsy won a seat in the U.S. House of Representatives, where she became the first woman from Hawaii, the first person of color, and the first Asian-American woman elected to Congress. Patsy would serve 24 years in Congress and introduce the first initiatives related to the Early Childhood Education Act, which led to the Elementary and Secondary Education Act of 1965 and the first federal child-care bill. She also initiated the lawsuit that led to changes to presidential authority under the Freedom of Information Act in 1971. The following year she co-authored the Title IX Amendment of the Higher Education Act, which was renamed the Patsy T. Mink Equal Opportunity in Education Act in 2002.

Patsy would also become the first East Asian-American woman to seek the presidential nomination of the Democratic Party. She would eventually hold the federal office of Assistant Secretary of State for Oceans, and International Environmental and Scientific Affairs, serve as president of Americans for Democratic Action, and be elected to the Honolulu City Council, where she served as chair for three years. She would be elected to the U.S. House of Representatives again in 1990, where she continued to work on legislation focused on youth, women, immigrants, and minorities until her death.